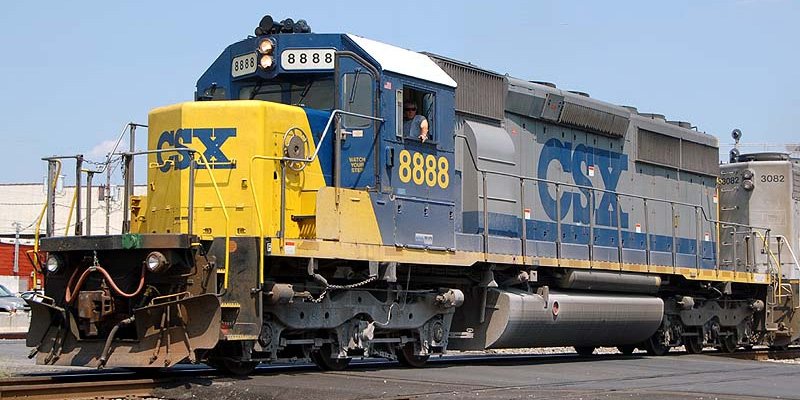 On 15 May 2001 a CSX engineer was using Locomotive #8888 to move a string of 47 freight cars (including 22 loaded) from one track to another within Stanley Yard in Walbridge, Ohio. Two tank cars contained thousands of gallons of molten phenol, a toxic ingredient of paints or glues that is harmful when it is inhaled, ingested, or comes into contact with the skin. A 35-year-old engineer noticed a misaligned switch and concluded that his train, although moving slowly, would not be able to stop short of it. He decided to climb down from the train, correct alignment and reboard the locomotive while it was still moving. While leaving the cab he applied the locomotive’s independent air brake, but did not applied the automatic air brake that would activate the brakes on each of the cars (during the intra-yard movements they often are disconnected anyway). Applying the locomotive’s brakes disabled the train’s dead man’s switch, which would detect the train is not manned and cut off the engine power as well as applying the brakes. The engineer also tried to apply the locomotive’s dynamic brake, but failed to do so. He then set the throttle for the traction motors at 100%. If the dynamic brakes had been selected as intended, this throttle setting would have caused the train to slow down. However, since dynamic braking was not engaged, the setting caused the train to accelerate. Therefore, the only functioning brake was the air brake on the locomotive, and this was not enough to counteract its engine power. The engineer climbed down from the cab, then attempted to reboard the accelerating locomotive. He was unable to do so and was dragged about 80 feet receiving minor cuts and abrasions. The train rolled out of the yard and began a 66-mile (106 km) journey south through northwest Ohio with no one at the controls.

Attempts to derail the train using a portable derailer failed and police shot at an emergency fuel cutoff switch, which had no effect because the button must be pressed for several seconds before the engine is starved of fuel and shuts down. A northbound freight train, Q63615, was directed onto a siding, where the crew uncoupled its locomotive and waited for the runaway to pass. Engineer Jess Knowlton and conductor Terry L. Forson chased the runaway train and successfully coupled onto the rear car, and slowed the train by applying the dynamic brakes on the chase locomotive. Once the runaway had slowed to 11 miles per hour, CSX trainmaster Jon Hosfeld ran alongside the train, climbed aboard, and shut down the engine.

The train was stopped just southeast of Kenton, Ohio. All the brake blocks on #8888 had been destroyed by the heat from being applied throughout the runaway trip. The story, in dramatized version, was basis for 2010 movie Unstoppable, starring Denzel Washington and Chris Pine.